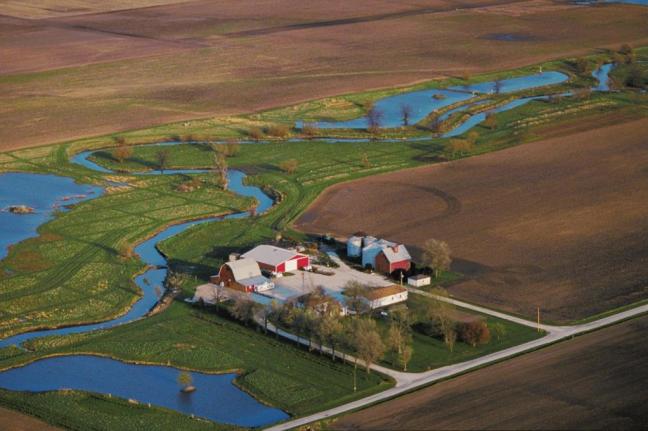 In a recent two-year study, conducted by researchers at the University of Illinois, local wetlands helped reduce the amount of nitrates leaking into the Embarras River by as much 62 percent. The wetlands also helped diminish nitrous oxide emissions, a potent greenhouse gas.

“Slowing down the rate of flow of the water by intercepting it in the wetland is what helps to remove the nitrate,” researcher Mark David, a biogeochemist in Illinois’ College of Agricultural, Consumer and Environmental Sciences, explained in a press release.

“The vegetation that grows in the wetland doesn’t make much of a difference because the grasses don’t take up much nitrogen,” David said. “It’s just about slowing the water down and allowing the microbes in the sediment to eliminate the nitrate. It goes back into the air as harmless nitrogen gas.”

These particular wetlands, between the Embarras River and the surrounding tile-drained agricultural land, were created 20 years ago. And they seem to be doing a solid job of curbing runoff contaminants — an isolated but noteworthy success story.

Fertilizers like nitrates make their way into America’s waterways and travel downstream. Significant accumulations of phosphorous and nitrates in the Gulf of Mexico have been blamed for massive algae blooms, which give off toxins and suck oxygen from the water — creating large dead zones and wreaking environment havoc. Similar scenarios have played out in the Great Lakes and anywhere major river systems dump fertilizer-laden water into lakes, seas and oceans.

Environmental groups have been pushing for regulators to build more wetlands, but farmers are reluctant to sacrifice land that could otherwise be used to grow more crops. Farmers prefer wood chip bioreactors to soak up nitrates from farm runoff, but they don’t do as well as wetlands at stemming high flows.

“No one wants to mandate a certain practice — wetlands, bioreactors, cover crops, adjusting the timing of applying fertilizer–all of these things that we know help reduce nutrient loss,” said David. “But, because of this research, we know that wetlands are a long-term nitrate removal method that keeps on working with little greenhouse gas emission.”

“By building a wetland, farmers have an opportunity to make a substantial nitrate reduction in the transport of nitrate from their fields to the Gulf,” David added.

The work of David and his colleagues is detailed in the latest issue of the Journal of Environmental Quality.