A signing ceremony in Khartoum celebrated the deal, calling for a new governing council, including civilians and generals, in a step closer toward transition to democracy rule in three years.

The military has ruled the country since it gained independence from Britain in 1956.

The deal follows eight turbulent months with protests, a military coup and a bloody military response.

It allows a transitional government to take power on Sept. 1, replacing the military junta, which ousted Sudan ruler Omar Hassan al-Bashir in April, for a little over three years, until elections can be held.

Power is shared between Sudan’s military and civilian coalition that arose from the streets in December in a sovereign council under the deal, but Lt. Gen. Adel Fattah al-Burhan, who has led the country since Bashir’s ouster, will lead the council for the first 21 months.

While overall power lies with the sovereign council, a technocratic government will operate under it.

Forces for Freedom and Change, which sparked the nine months of protests, nominated Abdalla Hamdok, an economist who has served as deputy executive secretary for the United Nations Economic Commission for Africa from 2011 until stepping down in October, as the government’s prime minister.

Hamdok will be appointed Tuesday and is scheduled to take the constitutional oath the next day.

The ousted military ruler, al-Bashir, is in prison in Sudan awaiting trial on corruption charges scheduled to start Monday.

The opposition alliance was hopeful, but concerned about compromises it has to make in the deal.

“We’re putting everything on this,” said Mohamed Azhary, one of many protesters who called for al-Bashir’s ouster. “People are feeling optimistic, but there’s a lot of mixed feelings, too. We are praying for the best.”

“We will stick to every single letter we have agreed on,” Hemeti told the BBC’s Zeinab Badawi in an interview broadcast ahead of the signing ceremony. 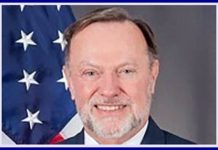