Sept. 12 (UPI) — A suicide bomber killed at least 32 people in eastern Afghanistan who were protesting a police commander accused of corruption on Tuesday.

The death toll could be higher and the number of injured is estimated to be more than 100.

“All people killed were civilians in the attack,” Ataullah Khogyani, the governor’s spokesman, told Al Jazeera.

The protesters had gathered to denounce Bilal Pacha, a police commander in the Nangarhar Province who they suspect of murder, robberies and maintaining a private prison, The New York Times reported.

Khogyani said the suicide bomber detonated his vest as he approached a tent where protesters had gathered.

It’s not yet clear who is responsible for the attack. The Taliban has denied involvement.

The bombing was just one of several throughout the day.

Hours earlier, bombs exploded in three schools, resulting in the death of at least one child.

The bombs were reportedly hidden inside the schools as part of the planned attack.

The Islamic State, which has vowed to attack educational institutions, claimed responsibility for the school bombings. 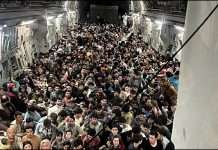