Dec 1 (UPI) — The U.S. Supreme Court appeared hesitant to rule on whether undocumented immigrants should not be counted in the U.S. Census report after hearing arguments from the Trump administration Monday.

Several of the court’s conservative justices suggested they should wait on the ruling that could shift power from migrant-rich states to smaller, and typically more Republican, states.

“We don’t know what the president is going to do, we don’t know how many aliens will be excluded,” Chief Justice John Roberts said.

The administration has argued that Trump has broad authority over the census count, including sending Congress a report that excludes immigrants for the purpose of determining how many members each state gets in the House of Representatives along with votes in the Electoral College.

Trump said in July that states with policies “that encourage illegal aliens to enter this country and that hobble federal efforts to enforce the immigration laws passed by the Congress should not be rewarded with greater representation in the House of Representatives.”

The court could potentially rule the case is premature and avoid a decision as Justice Samuel Alito said it would be a “monumental task” for the government to complete its count by Dec. 31.

According to an analysis by the Pew Research Center, Alabama, Minnesota and Ohio would each keep a seat they would otherwise lose because of population shifts, with states like Arizona, California and Texas losing seats and Montana likely gaining one.

A three-panel judge of the Ninth Circuit Court rejected an appeal from the Trump administration concerning a lower court’s ruling against its efforts.

The once-a-decade census count to establish congressional representation is required by the U.S. Constitution. The Supreme Court’s decision will hinge on their interpretation of what founders meant by the phrase “counting the whole number of persons in each state.”

Since the country’s founding, all residents, regardless of immigration status, have been counted.

Barbara D. Underwood, New York’s solicitor general, who is leading a group of state and local governments fighting Trump’s efforts, pointed out that the founders have already weighed in since the count has been done the same way since the census was first taken.

Justice Amy Coney Barrett appeared to suggest that Trump exceeded his authority by making the order, as the founders intended that all residents should be counted in the census.

“A lot of the historical evidence and longstanding practice really cuts against your position,” she told a lawyer for the Trump administration.

Justice Brett Kavanaugh said that while the challengers “advanced forceful constitutional statutory arguments” against the “categorical exclusion of all unlawful non-citizens” he was not sure that the government’s actions had reached that level. 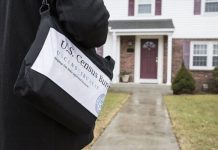