Dec. 10 (UPI) — The U.S. Supreme Court on Monday handed a legal victory to Planned Parenthood, opting not to hear an appeal concerning the rights of Medicare recipients.

In declining to hear appeals from the states of Kansas and Louisiana, the high court chose to left lower court rulings stand. The issue did not concern abortion but is abortion-related.

After an anti-abortion group released videos in 2015 that supposedly showed Planned Parenthood officials discussing the sale of fetal tissues, Kansas and Louisiana terminated Medicare agreements with providers affiliated with Planned Parenthood. Medicaid patients in those states said they violated a requirement that allowed patients to seek medical care from any qualified and willing provider. Lower federal courts agreed, and the bans in both states against Planned Parenthood, and funding for health services, were lifted.

At issue was whether private individuals could challenge a state’s Medicaid funding decisions. The states argued only the secretary of the Department of Health and Human Services could step in by withholding money.

Three of the nine justices — Clarence Thomas, Samuel Alito and Neil Gorsuch — voted to hear the appeal. Four are needed to initiate a Supreme Court review.

“So what explains the Court’s refusal to do its job here? I suspect it has something to do with the fact that some respondents in these cases are named ‘Planned Parenthood,'” Thomas wrote in dissent. “That makes the Court’s decision particularly troubling, as the question presented has nothing to do with abortion.”

The family planning organization offers vaccines, wellness examinations, screening for breast and cervical cancers, contraception services and pregnancy testing to low-income women — but not abortions, which are not funded by the federal government in most circumstances. 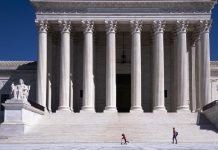 Supreme Court tackles whether teachers at religious schools are ‘ministers’