June 22 (UPI) — In a significant win for privacy advocates, the U.S. Supreme Court ruled Friday police must have a court order to be able to track a user’s cellphone records.

The high court said in a 5-4 decision police departments nationwide must obtain a warrant to gain access to cellphone data.

“A person does not surrender all Fourth Amendment protection [against unreasonable searches and seizures] by venturing into the public sphere,” Roberts wrote. “A majority of this court has already recognized that individuals have a reasonable expectation of privacy in the whole of their physical movements.”

Roberts argued tracking a cellphone provides an “intimate window” into a person’s life, and compared the practice to attaching an ankle monitor to the phone’s user.

The chief justice stressed the decision does not question conventional use of surveillance techniques and tools, like real-time cellphone location data or security cameras. He said acquiring certain warrants could be skipped in extreme cases involving imminent threats.

“It places undue restrictions on the lawful and necessary enforcement powers exercised not only by the Federal Government but also by law enforcement in every State and locality throughout the Nation,” he wrote.

Friday’s ruling was brought on by Timothy Carpenter, a Michigan man convicted of robbing Radio Shack and T-Mobile stores. FBI agents used three months of Carpenter’s cellphone records to show he was physically present at each store during the robberies.

Carpenter argued the conviction should be overturned because agents didn’t have a warrant for his records.

Although Carpenter lost in the lower courts — which relied on a Supreme Court decision from nearly 40 years ago — his attorneys argued the cellphone location data allows police to uncover a wealth of personal information. 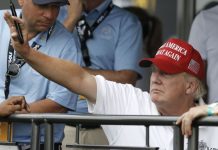