April 17 (UPI) — The U.S. Supreme Court nixed a provision of federal law Tuesday that requires immigrants who’ve been convicted of crimes to be deported.

The ruling was a victory for James Garcia Dimaya, whose two burglary convictions were considered violent crimes under the statute, even though they did not involve violence.

Dimaya, originally from the Phillippines, was admitted to the United States in 1992 as a lawful permanent resident.

In 2007 and 2009, he pleaded no contest to charges of residential burglary in California, and an immigration judge determined that Dimaya should be deported because of his two state court convictions.

The case was carried over from the high court’s 2016 term, when the justices were deadlocked at a 4-4 vote following the death of Justice Antonin Scalia.

Tuesday’s ruling said the law subjecting immigrants to deportation was unconstitutionally vague, with Gorsuch asking how the court could define a crime of violence if Congress did not.

“Even when it’s going to put people in prison and deprive them of liberty and result in deportation, we shouldn’t expect Congress to be able to specify those who are captured by its laws?” Gorsuch asked Deputy Solicitor General Edwin Kneedler.

Gorsuch continued the jurisprudence of Scalia, who’d also sided with liberals when it came to the vagueness of statutes used to convict criminal defendants. 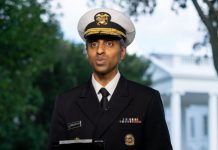