May 22 (UPI) — For the first time in more than 50 years, the Swedish government is distributing pamphlets to every household that informs people what to do in case the country is under threat, including military attacks.

The 20-page pamphlet is titled Om krisen eller kriget kommer (If crisis or war comes) and contains a variety if information in a national security crisis, including how to secure food, water and where to find bomb shelters.

“The purpose of the brochure is to help us become better prepared for everything from serious accidents, extreme weather and IT attacks, to military conflicts,” the brochure states. “Many people may feel a sense of anxiety when faced with an uncertain world. Although Sweden is safer than many other countries, there are still threats to our security and independence. Peace, freedom and democracy are values that we must protect and reinforce on a daily basis.”

The brochure also gives people information about their civil duties, including conscription into the armed forces for those of age and civilian national service requirements during times of war for anybody between the ages of 16 and 70.

“For many years, the preparations made in Sweden for the threat of war and war have been very limited. Instead, public authorities and municipalities have focused on building up the level of preparedness for peacetime emergencies such as flooding and IT attacks,” the brochure says. “However, as the world around us has changed, the Government has decided to strengthen Sweden’s total defense. That is why planning for Sweden’s civil defense has been resumed. It will take time to develop all parts of it again. At the same time, the level of preparedness for peacetime emergencies is an important basis of our resilience in the event of war.”

According to The Guardian, the Swedish government distributed similar brochures at the height of World War II in 1943. Updates to those brochures were issued regularly to the public until 1961. And between 1961 and 1991, they were just distributed to local and national government officials.

Similar leaflets were first distributed in neutral Sweden in 1943, at the height of the second world war. Updates were issued regularly to the general public until 1961, and then to local and national government officials until 1991.

The Swedish Civil Contingencies Agency, which is in charge of the project, said in a press release that the brochure was issued because of heightened security risks.

“The Swedish government believes that this information is important in the light of the deterioration in the security situation in the rest of the world,” the agency said, according to Euro News.

One of the newer threats that the brochure warns about is the spread of false information on the Internet. And one warning it gives Swedes is that any information about Sweden surrendering to a foreign power would be incorrect.

“If Sweden is attacked by another country, we will never give up. All information to the effect that resistance is to cease is false,” the brochure says. 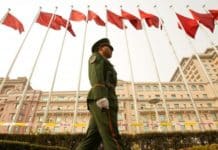 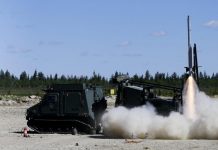