NEW YORK, May 10 (UPI) — Ted Cruz hasn’t slammed shut the door on restarting his campaign for the presidency.

The Texas senator, in an interview with conservative talk show host Glenn Beck on Tuesday, said that he wouldn’t completely rule himself out of the race for the Republican nomination if he starts winning primaries again.

GOP primaries are Tuesday in Nebraska and West Virginia.

“We launched this campaign intending to win,” Cruz told Beck. “The reason we suspended the race last week, it was Indiana’s loss, I didn’t see a viable path to victory — if that changes, we will certainly respond accordingly.”

After polls closed in Indiana, Cruz said he was suspending his campaign. Then Donald Trump, in his victory speech at Trump Tower in New York, called himself the presumptive GOP nominee. The only other candidate, Ohio Gov. John Kasich, suspended his campaign the next day.

“The voters in the primary seem to have made a choice,” Cruz said. “We’ll see what happens as the months go forward. I think we need to watch and see what the candidates say and do.”

Cruz has not endorsed Trump and hasn’t asked his supporters to back him.

“This is a choice every voter is going to have to make — and I would note it’s not a choice we as voters need to make today,” Cruz told Beck.

Cruz holds just 564 delegates to Trump’s 1,068, according to RealClearPolitics, and it takes 1,237 to win the GOP nomination.

Cruz has written to state party leaders in all the states where he won delegates that he intents to hang onto them for now, a Cruz campaign spokesman confirmed to Fox News. 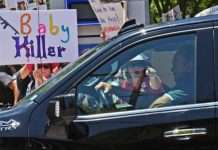