Feb. 25 (UPI) — No region will be immune to climate change, and new research suggests the Pacific Northwest is no exception.

To better predict how climate change will impact the northwest corner of the United States, scientists at Oregon State University and the U.S. Forest Service localized the predictions of 30 “general circulation” climate models.

General circulation models produce outputs at scales too large to be applied to small-scale systems, like a regional watershed. But scientists were able to localize the large-scale predictions using a process called “downscaling.”

During the downscaling process, researchers populated the combined models with weather and atmospheric data collected at research stations throughout the Northwest.

Though the predictions feature variability depending on the geography of the region, all the predictions for the Pacific Northwest are in basic agreement. All the outputs fell within a 0.5 degrees Fahrenheit range.

All of the simulations operated under the “business as usual” assumption, the assumption that current emission trends will continue unaltered.

“From a regional perspective, the differences in projected future changes are minor when you look at how much each projection says climate will change for the business-as-usual scenario,” Yueyang Jiang, a postdoctoral scientist at OSU, said in a news release. “The climate projections were created using different downscaling methods, but the projected changes in climate among them are similar at the regional scale.”

That the Pacific Northwest is certain to warm as climate change continues is no surprise, but the latest research is likely to prove useful for climate scientists translating large-scale climate models for localized, high-resolution projections. 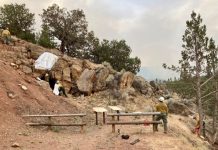 Firefighters, archaeologists team up to protect hieroglyphs from Utah wildfire