May 20 (UPI) — Some 8,000 people gathered before a plywood temple memorial and watched it burn in a gesture of symbolic healing following last year’s Florida school shooting.

The “Temple of Time” art installation by artist David Best was set ablaze Sunday near Marjory Stoneman Douglas High School, where on Feb. 14, 2018, a gunman opened fire and killed 17 people, including 14 students.

The temple, a 35-foot-high wooden structure with a spire, was opened to the public a year ago following the shooting to offer residents a place to express their grief and pain, and its burning was to symbolize healing and forgiveness, Best said.

During the ceremony Sunday, 17 people in honor of the 17 victims of the school shooting lit the temple on fire, which people had adorned with messages of love and cherished items.

“I urge you all to let go of something that has burdened you,” Coral Springs Mayor Scott Brooks said. “And like the smoke from the temple, release it to the night sky.” 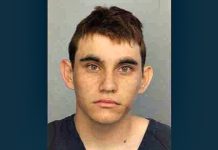 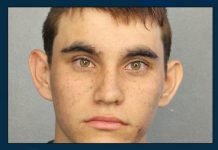 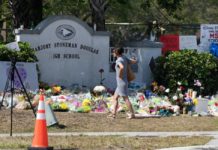