Feb. 2 (UPI) — British officers shot and killed a man after at least three people were injured in what police described as a terrorist-related incident on Sunday.

Metropolitan Police wrote on Twitter that a suspect died and the scene was fully contained after multiple stabbings in the town of Streatham, just south of London on Sunday afternoon.

“As part of a proactive Counter Terrorism operation, armed officers were in immediate attendance and shot a male suspect who was pronounced dead at the scene,” Deputy Assistant Commissioner Lucy D’Orsi said.

A device was found strapped to the suspect’s body, but police established that it was a “hoax device.”

Police said the suspect has not been formally identified but they are “confident” he was 20-year-old Sudesh Amman.

“The suspect had been recently released from prison where he had been serving a sentence for Islamist-related terrorism offenses,” said D’Orsi.

D’Orsi said two people were stabbed and one sustained minor injuries believed to have been caused by broken glass after police fired their weapons.

“We were called at 1:58 p.m. today to reports of an incident in Streatham High Road,” the London Ambulance Service said. “We are working closely with the other emergency services and are treating a number of patients at the scene.”

Streatham High Road was closed in both directions following the incident.

London Mayor Sadiq Khan issued a statement on Sunday saying he is in close contact with police officials, and thanking officers and other first responders for their response.

“Terrorists seek to divide us and to destroy our way of life — here in London we will never let them succeed,” he said.

Prime Minister Boris Johnson said in a tweet that his “thoughts are with the injured and all those affected.”

Britain’s security services lowered the national threat from severe to substantial in November, indicating attacks are “likely,” rather than “highly likely.”

Since then there have been three terror attacks in the country, including a stabbing at the London Bridge that left two people dead in November and an incident last month in which inmates at HMP Whitemoor jailed for terror offenses attacked guards while wearing fake bomb vests. 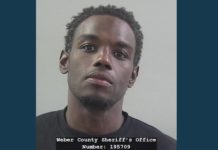