May 13 (UPI) — Texas Attorney General Ken Paxton has warned local officials that orders mandating face masks be worn and other emergency measures aimed at stemming the spread of the coronavirus are unlawful.

In letters sent Tuesday to Dallas, Travis and Bexar Counties and the cities of Austin and San Antonio, the attorney general’s office said some local public health orders are unlawful and confuse citizens, urging officials to repeal them.

“A few Texas counties and cities seem to have confused recommendations with requirements and have grossly exceeded state law to impose their own will on private citizens and businesses,” Paxton said in a statement. “I trust that local officials will act quickly to correct any orders that unlawfully conflict with Texas law and Gov. [Greg] Abbott’s Executive Orders.”

Each letter is tailored to each local government, highlighting measures put in place to prevent further spread of the coronavirus that do not mirror those ordered by Gov. Abbott.

For example, in the letter to Bexar County and San Antonio, Paxton’s office said orders mandating that houses of worship restrict the number of people on the premises conflicts with the governor’s order by “limiting how a house of worship conducts services.”

Concerning laws over wearing face coverings in public, Vassar wrote to Dallas County that it was exceeding the law by mandating everyone over the age of two to wear masks when using services.

Vassar said Abbott’s executive order “encourages individuals to wear appropriate masks, but it does not require them.”

“The governor’s order recognizes that Texans will act responsibly and make smart decisions to protect themselves and their families,” he wrote. “In contrast, your order purports to strip Texans of their agency.”

Dallas County Judge Clay Jenkins pushed back against the letter late Tuesday, stating officials intentionally modeled health guidelines based on Abbott’s recommendations “never imagining he did not want his own guidelines followed.”

Austin Mayor Steve Adler accused Paxton of attempting to politicize the health crisis, stating, “I will not follow the AG down that road.”

Paxton sent the letters nearly a week after writing to a Dallas County judge calling for the release of a salon owner who was arrested after opening her business in spite of orders restricting all but essential services to shutter.

Late last month, Attorney General William Barr instructed federal prosecutors to be on the lookout for local coronavirus directives that violate the Constitution and the rights of citizens. 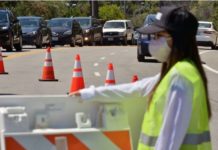