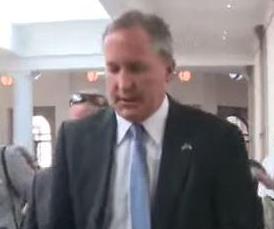 NBC affiliate KXAS-TV reported Paxton was charged with securities-related fraud by a Collin County, Texas, grand jury last week — and that a Tarrant County judge has been assigned to preside over the case.

The charges will be unsealed on Monday at noon CDT, after which Paxton may surrender for booking, according to a {link:report by Dallas ABC affiliate: WFAA-TV.

It wasn’t immediately clear exactly what charges Paxton might face, but the sources reportedly said the grand jury and two special prosecutors have been investigating whether the attorney general acted as a broker and solicited clientele without a license while he was in private practice before becoming Texas attorney general.

Paxton, a Republican who was sworn in as Texas attorney general in January, admitted to being unlicensed and paid a $1,000 fine last year, NBC 5’s report said.

The Texas Democratic Party said Saturday that the charges against Paxton are the result of an investigation by the Texas Rangers.

“When it is appropriate, I will comment on that,” Paxton told a KXAN-TV reporter Wednesday. The attorney general’s office has not yet issued a formal response to the allegations.

“It’s time for Paxton to face the consequences,” Texas Democratic Party Deputy Executive Director Manny Garcia said in a statement Saturday. “This is yet another example of the corrupt culture that fester [sic] with one-party, unchecked Republican power.”

WFAA reported that the special prosecutors planned to bring a third-degree felony charge of failing to register with the state securities board, and a first-degree charge of securities fraud — and that the case may be related to Servergy, a Texas company that has been investigated by the U.S. Securities and Exchange Commission.

If Paxton is charged, he will be able to continue in his role as Texas attorney general until trial — similar to how Gov. Rick Perry continued his duties following a two-count felony indictment last year.

“While we await further information, one thing is abundantly clear: Republican Ken Paxton couldn’t get away from the Texas Rangers. No politician is above the law,” Garcia said.

Paxton has been acting as Texas’ chief law enforcement official for just six months. Between 2003 and January, he served in the Texas House of Representatives and the Texas Senate.

Paxton’s office has recently been investigating Planned Parenthood in Texas and testified last week to a state senate committee, pledging an “aggressive investigation” into its business practices. Planned Parenthood has been under fire recently for undercover videos that show company personnel speaking about fetuses from abortions.

“My office is aggressively investigating #PlannedParenthood and will get to the bottom of their actions,” Paxton tweeted Thursday.