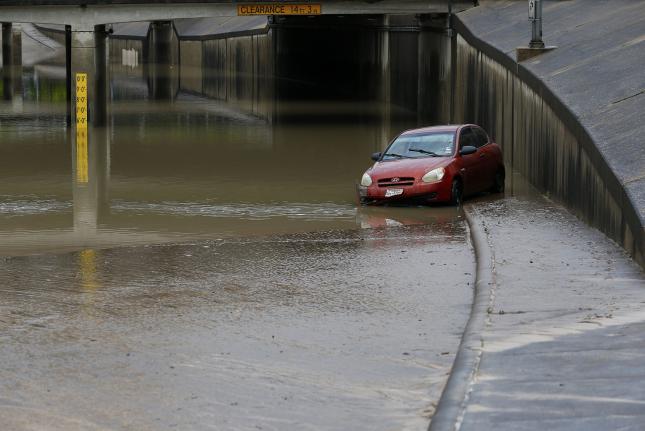 HOUSTON, May 28 (UPI) — Under the threat of yet more storms that will bring rain, hail and possible tornadoes, Texas and Oklahoma emergency officials Thursday are attempting to assess the damage left by deadly flash floods while searching for nearly a dozen people still missing.
[one_fourth]

[/one_fourth][three_fourth_last]
The storms, which produced flooding from Mexico into central United States, left 17 dead in Texas, four in Oklahoma and 14 in Mexico. Late Wednesday, emergency crews discovered the body of 43-year-old Michelle Carey-Charba whose Wimberley, Texas vacation home was swept away in Blanco River flood waters. Her husband, their two sons, ages sixf and 4, her parents and three other friends inside the home are still missing. A body of a boy was found on the banks of the Blanco River, but it’s unclear who he is. An unidentified man was found in a truck after floodwaters receded.

In Hays County, where eight people are still missing, officials are bracing for more storms.

“We’re very vulnerable right now,” Hays County Commissioner Will Conley said. “If we were to receive a small amount of rain, we could be right back into an emergency situation.”

Severe weather with the threat of flash flooding is expected Thursday afternoon into Friday morning from portions of the Texas panhandle into west central, south central, northwest, and north central Texas, emergency management officials said. The National Weather Service said sodden Houston could see storms for the next several days. In Oklahoma, rain is expected to continue through the weekend.

The storms have damaged thousands of structures, 1,400 in Houston alone. Some were swept away in the flood waters, other seeing rising water levels inside the homes. Evacuations were ordered in Horseshoe Bend, located outside Fort Worth, as well as areas outside Houston.

“I’d get out if I was you,” Horseshoe Bend resident Joyce Bosley told CBSDFW. “If not, do a lot of praying and have your river shoes and a row boat, a way out, because the river is going to flood.”