Dec. 5 (UPI) — A Texas police officer was shot dead while responding to a disturbance outside of a grocery store, the Mesquite Police Department said in a statement.

Richard Lee Houston II, a sergeant with the police force, was shot “multiple times” in the parking lot of an Albertson’s grocery store and was transported to Baylor Hospital where he was pronounced dead.

The male suspect was also shot and remains in critical condition at the hospital, according to the department.

Investigators believe the suspect shot himself and that Houston never fired his weapon, KTVT reported. Further details about the incident were not immediately known.

“This was a senseless act of violence. Richard was a great officer, friend, father, and husband. Please keep his family and our family in your prayers,” Mesquite Police Chief David Gill said in a statement.

The Mesquite Police Department noted Houston’s extensive achievements in his 21-year career with the force. The father-of-three had received honors including 48 letters of commendation, two lifesaving awards and a police commendation bar.

Houston’s career with the department included serving on the SWAT team for more than 10 years — as well as working in criminal investigations handling burglary and theft, homeland security, and juvenile and gang cases.

“In April 2021, a Certificate of Merit was presented to Officer Houston for his heroic actions assisting the Garland Police Department and the Texas Department of Public Safety with the arrest of three suspects of a stolen car used in various crimes,” the department said in the statement praising Houston’s service. “And he prevented a suicide attempt by one of the suspects during the apprehension efforts.”

Mayor Daniel Alemán Jr. announced that Mesquite would hold a prayer vigil in his honor at the police department on Sunday.

“Now is not the time for politics, but for a time for prayer,” Alemán said. “Please take a moment to pray for Richard’s wife and children, the Houston family, and the entire Mesquite Police Department as they begin the long journey of the grieving process.”

Texas Gov. Greg Abbott also addressed the incident in a statement to Twitter.

“Our hearts are with the loved ones of the @MesquitePD_TXofficer who passed away this evening after being shot in the line of duty,” Abbott tweeted. “This tragedy is a solemn reminder of the risks our officers take every day by putting their lives on the line to serve & protect our communities.” 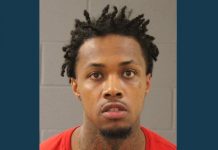