Oliver, who was fired from the Balch Springs Police Department days after the shooting, faces life in prison after being found guilty of murder for firing his rifle into a car carrying five unarmed teens as they left a house party in April 2017. The shooting killed Jordan, who was a passenger in the car.

The jury also found Oliver not guilty on two charges of aggravated assault. Jurors had the option of finding Oliver guilty of manslaughter, which carries a lesser punishment of up to 20 years in prison, but ultimately decided on the murder charge.

Attorney Daryl Washington said the verdict was a symbolic victory for all unarmed black people shot and killed by police.

Jurors deliberated for 12 hours Monday and Tuesday and asked the judge several questions about Oliver’s testimony and why he decided to fire his weapon at the car full of teenagers.

They also sent two notes to the judge, one asking for a transcript of some of Oliver’s testimony to settle a dispute over whether Oliver said the sound of car glass breaking factored into his decision to shoot and a second requesting a copy of a written statement Oliver provided after the shooting. The second request was denied.

Oliver and a second officer, Tyler Gross, were breaking up a house party on April 29, 2017, when they heard gunshots, which were later determined to have come from a nearby nursing home and were unrelated to the party.

Gross attempted to stop a Chevrolet Impala that Jordan, his brothers and friends were in when Oliver fired into the car and struck Jordan in the back of the head. Jordan died at the scene.

Jordan’s brother, Vidal Allen, was driving the vehicle and also testified he wasn’t trying to hit Gross. He said he couldn’t see that an officer was yelling at him to stop the car.

“I didn’t understand that was a police officer at that time,” he said. “I just wanted to get home and get everyone safe.”

Gross struck the back window of the vehicle, causing it to shatter and Oliver proceeded to fire his rifle. A video expert said the first two shots came after the car was already past Gross and the final three came after it passed Oliver.

The defense argued the only perspective the jury should consider was Oliver’s, who said he “had no other option” than to fire at the vehicle he believed was going to hit his partner.

Lead prosecutor Michael Snipes said Oliver’s statement was “the most unreasonable, craziest thing you’ve ever seen in your life.”

“None of those shots could’ve done anything to protect Tyler Gross,” Snipes said. 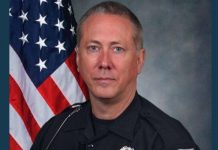