Nov. 2 (UPI) — The Texas Supreme Court on Sunday rejected a petition seeking to invalidate 127,000 votes cast at drive-thru polling stations in the state’s most populous county.

The all-Republican court denied the challenge by a Republican activist and three Republican candidates in the state arguing that the drive-thru polling sites in the largely Democratic Harris County are unconstitutional.

The court denied the request without an order or opinion, as they did in a similar challenge last month by some of the same plaintiffs.

An emergency hearing will be held on Monday morning in Houston for a challenge by the same plaintiffs in federal court.

Drive-thru ballots account for about 10% of in-person ballots cast through the state’s early voting period.

In response to the COVID-19 pandemic, the county set up 10 drive-thru centers where voters can pull up in their vehicles and vote on an electronic tablet passed through their window by a poll worker after having their registrations and identifications confirmed.

The plaintiffs, including Harris County Republicans State Rep. Steve Toth, congressional candidate Wendell Champion and judicial candidate Sharon Hemphill argued drive-thru voting was an expansion of the state’s curbside voting policy and should only be available to people with disabilities.

The Harris County Clerk’s Office countered that its drive-thru locations are separate and distinct polling places from the curbside locations and therefore can be utilized by all voters. 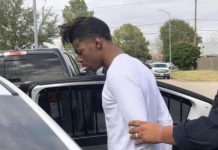