March 2 (UPI) — New research suggests the last populations of woolly mammoths suffered from deteriorating genomes as a result of isolation and inbreeding.

During the last ice age, woolly mammoths were the most common large herbivores in North America, Siberia and Beringia, the land bridge connecting the two regions. A warming climate and the hunting pressures of early humans pushed most mammoth populations to extinction around 10,000 years ago.

Small populations survived in isolation for several thousand more years. One of those populations persisted on Wrangel Island in the Arctic Ocean until about 3,700 years ago.

Scientists at the University of California, Berkeley compared the genome of a mainland mammoth, dating back some 45,000 years, with the genome of a Wrangel Island mammoth that lived 4,300 years ago. Their analysis — detailed in the journal PLOS Genetics — suggests island mammoths accumulated multiple damaging genetic mutations as a result of their isolation.

The research showed island mammoths lost genes related to olfactory receptors. The mammoths also lost genes necessary for the production of certain urinary proteins. Because urine is used as a signaling mechanism, such mutations may have impacted mammoths’ social status and mate choice. Scientists also found mutations that may have given their coat a satiny translucence.

“There is a long history of theoretical work about how genomes might change in small populations,” researcher Rebekah Rogers explained in a news release. “Here we got a rare chance to look at snapshots of genomes ‘before’ and ‘after’ a population decline in a single species. The results we found were consistent with this theory that had been discussed for decades.”

The findings are a reminder of the risks of genetic isolation, a problem facing a variety of modern endangered species and the conservationists trying to preserve their place on Earth. 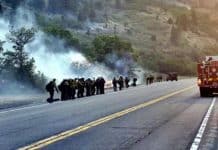