Seven words captured the continued joy being felt by those fighting fires in the Australian state of New South Wales as days of rain continued to pour down on the wildfire-embattled areas.

“The good news just keeps rolling in!” the New South Wales Rural Fire Service tweeted Tuesday. The NSW RFS noted that a fire that had been burning for 210 days had been declared out.

That was on top of a previous report that drenching rains across NSW had extinguished 30 fires, including the Gospers Mountain “mega-blaze,” which burned more than 1.24 million acres.
That leaves four fires not yet contained after wildfires have been blamed for killing at least 28 people and almost a half billion animals in Australia. Tens of thousands of residents evacuated their homes in New South Wales and Victoria.

As AccuWeather predicted back in mid-January, though, a changing weather pattern benefited firefighting efforts across southeast Australia as cooler air and regular downpours allowed firefighters to get better containment on the larger and more dangerous fires.

The heaviest rainfall in decades was reported in Sydney from Friday into Monday as the city received 15.42 inches of rain over this four-day stretch. That’s more than three times the normal amount of rain for the entire month of February.

The ensuing flooding from the heavy rainfall caused at least 100,000 power outages in the Sydney area, according to the BBC. More than 200 people were also rescued by emergency services in Sydney during the recent flooding.

However, AccuWeather forecasts more good news for those dealing with wildfires: “The threat has ended for the parts of New South Wales where they’ve had so many fires,” said AccuWeather senior meteorologist Eric Leister. “The soil is so saturated now that fires aren’t really going to spread. The environment is not favorable for these big, fast-spreading fires that they had at the end of last year.”

Flooding will continue to be a concern this week as daily showers and thunderstorms drench locations from southeast Queensland southward through eastern New South Wales, including the Sydney area, according to AccuWeather meteorologists.

Additional rainfall of 1 inch to 2 inches will be common into Thursday with an AccuWeather Local StormMax of 6 inches.

While the rains have soaked parts of Australia, segments of the country remain dry and still at risk, though.

“South Australia and even a small part of western New South Wales have gotten little to no rainfall this year,” Leister said. “That’s where I think there could still be fire problems the next several months because they haven’t received very much rain, it gets really hot there – and the heat builds over the interior and just pours down into these areas – and it’s still bone-dry.

“But for New South Wales, it’s done now, even though the fires are still burning,” he added. “There’s no further threat so it’s just a matter of letting this stuff extinguish itself.”

Officials warn of over 25 wildfire starts this weekend 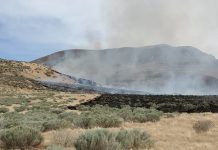 Exploding target leads to wildfire in Utah County, cause of a second blaze unconfirmed