A single-engine RV-7 experimental plane, sold in kit form, crashed in Broward County, Fla., Sunday night. After the pilot’s check-in contact was not made, his family notified the Federal Aviation Administration. The plane was discovered by the Broward County Sheriff’s Office Marine and Fire Rescue Unit son Monday morning. The pilot, the only occupant, dead. The pilot was not identified.

In Frankenmuth Township, Mich., a private plane conducting a “touch and go” maneuver, in which the plane lands and then takes to the air without coming to a full stop, crashed Sunday afternoon at the end of a privately-owned airport’s landing strip. Police Chief Don Mawer said the pilot and a passenger, a child, died in the crash, adding the plane caught fire after it struck the ground.

In both cases, the cause of the crash is undetermined, and FAA and National Transportation Safety Board personnel are investigating the incidents. 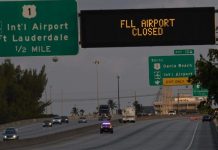