BEIJING, Aug. 17 (UPI) — Tianjin residents are demanding restitution in the aftermath of the Aug. 12 and Aug. 15 explosions that killed at least 114 people, but Chinese officials are keeping a tight lid on information and have shuttered 50 websites for “inciting panic.”

The two explosions Aug. 12 resulted from the illegal storage of hundreds of tons of sodium cyanide less than a kilometer away from a tony residential district in Tianjin. It is illegal in China to store such toxic material so close to residences, TIME reported.

The violation of safety laws indicate many of the rules in Tianjin were being bent, broken or ignored, the BBC reported Monday.

Thousands of residents have become homeless and as frustration grew, many staged protests demanding compensation for their losses – and for government oversight. Chinese state media reported 17,000 homes were damaged by the blasts, many located within 1,640 feet of the warehouse storing the poisonous chemical.

Sodium cyanide is a white powder that is lethal if ingested or inhaled. The blasts may have resulted in traces of the chemical being blown out to areas within a three-kilometer radius, according to Maj. Gen. Shin Laze, CNN reported.

Families of firefighters also have begun protesting on social media the government’s lack of transparency and said authorities in Tianjin are not updating them on their relatives’ status. Of the 70 missing, many are firefighters who were the first to arrive.

Assurances from the central government have not been sufficient to address the concern of families struggling to obtain information about the dead or the missing. China’s Premier Li Keying visited the blast site with other officials to honor dead firefighters and Tianjin’s deputy mayor had said the blast site would be “mostly cleaned up” by Monday evening.

Information from non-government sources is being strictly regulated online, and the Cyberspace Administration of China said Saturday it had suspended 32 websites and shut down 18 more on the grounds of a “zero tolerance” policy against scaremongering,TIME reported.

Chinese state media reported Tianjin, the country’s fourth-largest city, grew 16.5 percent a year as the rest of the economy slowed. As the world’s 10th-largest port, Tianjin is the receiving point of 40 percent of all imported vehicles. Damages to goods affected by the blasts is estimated to be hundreds of billions of dollars, and global brands Hyundai, Volkswagen, Renault and Toyota are estimated to have suffered $6.25 billion in damages. 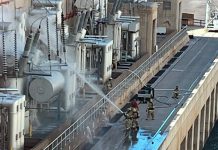