Oct. 25 (UPI) — About 800 people, including Japanese Prime Minister Yoshihide Suga and former Prime Minister Shinzo Abe, gathered in Tokyo on Saturday to call for the immediate return of Japanese citizens abducted by North Korea in the 1970s and 1980s.

The rally was held at the same venue as a farewell ceremony for Shigeru Yokota, the father of Megumi Yokota, who was kidnapped by North Korea in 1977 at the age of 13.

“I will take the lead in making a breakthrough [on the abduction issue] without missing any opportunities,” said Suga, who was elected last month.

Described by Suga as someone “whose words moved people’s hearts,” Shigeru Yokota died in June at age 87 from natural causes.

He worked for more than 20 years with family members of other abductees to pressure the Japanese government to rescue their loved ones, who they believe are still alive.

“I believe Megumi is fine,” Shigeru Yokota’s widow, Sakie, 84, said at the gathering.

Megumi Yokota disappeared on her way home from school on Nov. 15, 1977, prompting her father to form the Association of Families of Victims Kidnapped by North Korea, of which he served as chief for more than 10 years until November 2007.

“Many of the parents waiting for their abducted sons and daughters to return home are fighting on the front lines despite their old age,” said Megumi Yokota’s brother, Takuya, 52, who is secretary-general of the association. “There is no time left.”

The gathering had been delayed due to the coronavirus pandemic, and the number of people at the gathering was limited. 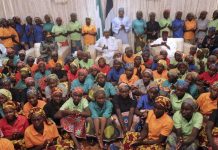 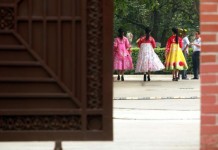