NUKU’ALOFA, Tonga, Jan. 15, 2022 (Gephardt Daily) — The eruption of a massive underwater volcano in the South Pacific sent a tsunami wave crashing into Tonga’s largest island Saturday, while triggering tsunami alerts across the region.

The eruption of the Hunga Tonga-Hunga Ha’apai volcano, about 40 miles north of Tonga’s capital of Nuku’alofa, was captured by satellites about 5:26 p.m. local time in a stunning display of power which was heard as far away as New Zealand and Australia.

The sound of the blast described as rolling thunder was also reported in Fiji.

While damage assessments are still being made video posted on social media shows the tsunami as it reaches the Tongan shore and pushes its way through the capital city, flooding streets, homes and other structures.

The wave that hit the Tongan capital was measured at 2.7 feet, while a wave that reached Pago Pago, the capital of American Samoa, was about 2 feet, according to the Pacific Tsunami Warning Centre.

Tsunami videos out of Tonga 🇹🇴 this afternoon following the Volcano Eruption. pic.twitter.com/JTIcEdbpGe

A tsunami advisory was issued for the U.S. west coast, including California, Oregon Washington and Alaska, according to the NWS National Tsunami Warning Center in Palmer, Alaska. The NTWC reported a wave one-to-two feet high could reach the U.S. mainland between 7 a.m. and 7:30 a.m. Pacific Time.

Rising tides were already seen in the Hawaiian islands with only instances of minor flooding reported.

The Tsunami advisory is as follows:

* CALIFORNIA, The coast from The Cal./Mexico Border to The Oregon/Cal. Border including San Francisco Bay

* OREGON, The coast from The Oregon/Cal. Border to The Oregon/Wash. Border including the Columbia River estuary coast

* SOUTHEAST ALASKA, The inner and outer coast from The BC/Alaska Border to Cape Fairweather, Alaska (80 miles SE of Yakutat)

The initial eruption lasted about eight minutes, but how long the volcanic activity will continue is unknown. Volcanic activity in the region often lasts for weeks or longer.

The blast sent a plume of ash and smoke over 12,000 feet high, impacting the weather throughout the region. Ash, mixed with rain, was reportedly falling across Tonga shortly after the eruption. 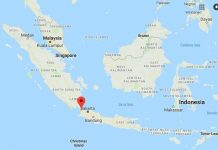 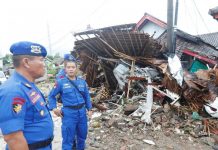 Tsunami kills at least 222 in Indonesia day after volcano eruption