Dec. 9 (UPI) — The Minnesota National Guard has identified the three soldiers who were killed in last week’s helicopter crash as having returned in May from a nine-month deployment to the Middle East.

The three soldiers were killed shortly after takeoff Thursday near St. Cloud where they were based as part of Company C, 2-211th General Support Aviation Battalion.

The National Guard said that the three soldiers had returned to the United States in the spring after having conducted medical evacuations in support of Operation Spartan Shield and Operation Inherent Resolve in Kuwait.

Gov. Tim Walz ordered all United States and Minnesota state flags be flown at half-staff at all government buildings in memory of the victims until Monday at 2:05 p.m., which was the same time on Thursday when officials lost contact with their aircraft.

The Plantenberg family in a statement said that they are “deeply grateful” for the support they have received.

“We take comfort in our faith, the love of family and friends and the knowledge that Kort died doing what he loved best: servicing his country and pursuing his life-long dream to be a Black Hawk helicopter pilot,” the family said.

Investigators from the Army Safety Center at Fort Rucker, Ala., were dispatched to the crash site Friday to begin a “comprehensive investigation” into its cause. 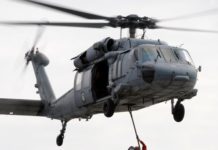