June 20 (UPI) — The toxic invasive plant called giant hogweed is usually found in New York and the Northeast, but the dangerous invader was recently discovered in Virginia. Officials worry the plant is spreading.

Reactions to the toxic plant can include blisters that result in scarring. If a person gets sap in their eyes, blindness can also occur.

“If you get exposed to it, best course of action to wash up with soap and water and stay out of sun,” Jordan Metzgar, a curator at Virginia Tech’s Massey Herbarium, told the Washington Post. “Try to avoid light or tanning booths for the next couple days.”

Metzgar recently helped identify a patch of giant hogweed in Berryville, Va. This particular colony featured 40 plants. Each plant produces a few hundred seeds, which can be carried away by the wind or accidentally spread during soil transport.

The massive stalks can grow from 7 to 14 feet tall, and the leaves can stretch five feet across. The stalks feature thorns and the plant produces large white flower blooms — it’s an intimidating plant.

According to Popular Science, the plant has native relatives that look similar. The best way to identify giant hogweed, Heracleum mantegazzianum, is to look for the purple splotches and white hairs on its stalk.

Giant hogweed is native to Central and Southeast Asia. It was first brought to the United States as a decorative plant in the early 20th century. 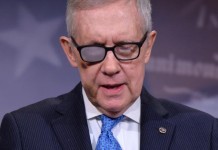