Oct. 3 (UPI) — Twenty-two paratroopers have been injured after wind blew them into trees while training at Camp Shelby in Mississippi.

The incident at Camp Shelby, located at the southern boundary of Hattiesburg, Miss., occurred at around 8 p.m. Wednesday, during a military parachute training exercise with the 4th Brigade Combat Team, 25th Infantry Division in Alaska, the military posted on Facebook.

Camp Shelby commander Col. Bobby Ginn told WDAM7 the 22 soldiers were injured when they jumped from a C-130 aircraft and wind blew them away from their intended drop zone into a group of pine trees.

U.S. Army Alaska spokesman John Pennell said that 89 paratroopers were aboard the C-130 for the training exercise.

Medics treated 15 of the injured on site and seven were transported to local hospitals, Pennell said.

The 1st Battalion, 501st Parachute Infantry Regiment, said in a statement that 87 jumpers landed in the trees.

“We now have 83 jumpers accounted for, while four others are getting assistance from the fire department to get down from the trees,” the 1st Battalion posted on Facebook early Thursday.

By late morning, it said that all 87 troopers that landed in trees were recovered from last night’s jump.

“Thankfully, a majority of the paratroopers were uninjured from the tree landings,” the post read. “One soldier received a successful surgery for a broken back, and is expected to recover well.”

“We have a lot of extremely professional soldiers who are ready to rock and roll,” Lt. Col. Deidre Smith, of the Mississippi National Guard, told USA Today. 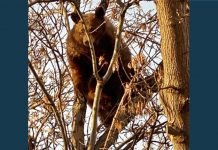