Aug. 14 (UPI) — Tropical Depression Fred, which is expected to strengthen back into a tropical storm over the weekend, is no longer likely to make direct landfall on the Florida Peninsula, forecasters said Friday.

In its 8 p.m. EDT advisory, the National Hurricane Center said the system had maximum sustained winds of 35 mph and was located 45 miles west of Caibarien, Cuba, and 175 miles southeast of Key West, Fla. It was moving west at 12 mph, picking up speed from Thursday.

The storm brought tropical storm conditions to Dominican Republic and Haiti on Wednesday, but weakened to a tropical depression after passing over the island of Hispaniola.

The NHC said it continued to produce heavy rains across Eastern Cuba early Friday when it issued a tropical storm warning for the Florida Keys, which could begin seeing impacts Friday night or Saturday morning.

Modeling initially indicated the center of the storm could make direct impact along the Florida Keys or elsewhere along South Florida, but an adjustment in the NHC’s 5 p.m. advisory now has the storm swinging out west, further into the Gulf of Mexico. It’s likely to make impact as a tropical storm along the Florida, Alabama or Mississippi Gulf Coast on Monday afternoon.

“People need to remain vigilant about this system as it is likely to make a comeback prior to reaching the U.S. this weekend,” AccuWeather chief on-air meteorologist Bernie Rayno said.

A tropical storm warning was in effect for the Florida Keys from Ocean Reef to the Dry Tortugas and the Florida Bay.

A tropical storm watch was in effect for the southwest coast of Florida Englewood south and east to Ocean Reef.

Elsewhere in the Atlantic, Tropical Depression Seven formed east of the Lesser Antilles and is expected to develop into Tropical Storm Grace sometime overnight. A tropical storm warning associated with the storm was issued for Antigua and Barbuda, St. Kitts and Nevis, Montserrat, Saba and Sint Eustatius, Sint Maarten, and St. Martin and Bathelemy. A tropical storm watch was in effect for U.S. Virgin Islands, Puerto Rico, Anguilla and the British Virgin Islands.

“On the forecast track, the center of the depression is forecast to move over the Leeward Islands Saturday night, over the Virgin Islands and Puerto Rico on Sunday, and then over the Dominican Republic on Monday,” the NHC said.

Fred follows five other named storms in the Atlantic basin so far this year — Ana, Bill, Claudette, Danny and Elsa. Of those five, Elsa was the only one to gain hurricane strength. 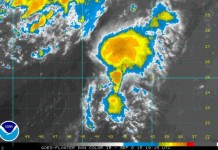