ROSEAU, Dominica, Aug. 28 (UPI) — With more than 12 inches of rain in a matter of hours, Tropical Storm Erika damaged numerous buildings and killed at least 20 with more still missing.

Erika’s winds and rain have been hitting Puerto Rico and Hispaniola today, but the storm left devastation behind in the island of Dominica in the eastern Caribbean after moving through Wednesday and Thursday.

The storm is expected to reach Florida on Monday but may be torn apart by mountains in Hispaniola or Cuba.

But following the deluge in Dominica, forecasters are saying Erika’s worst effects will be as a rainmaker, and that rain will likely continue no matter what the storm’s status is.

Dominica Prime Minister Roosevelt Skerrit reported widespread damage across the island, most notably in the town of Petite Savanne, where a mudslide hit. Rescuers have not been able to reach the town, and the only way into the island itself currently is by helicopter.

Florida Gov. Rick Scott declared a state of emergency in every county Friday morning and urged residents to “get ready.”

The storm has a 50-50 chance of surviving the next 24 hours as it treks over Hispaniola and into the warm Atlantic waters, according to Weather Underground co-founder Dr. Rick Masters. It could strengthen there and become a stronger tropical storm adding more powerful winds to its heavy rainfall. 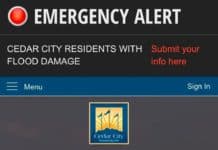 State of emergency declared after flooding in Cedar City