Another 127 people were injured in the blast in the al-Jahfal training camp near Tripoli, a former military base, said the Lana news service, an agency operated by the internationally acknowledged government of Libya, one of two governments claiming to rule the country. Since the 2011 fall of leader Moammar Gadhafi, Libya has endured political instability and what is believed to be a growing presence of Islamic State militants.

The rival governments signed a deal arranged by the United Nations last month to work toward a unified government, but implementation has not started.

Local Libyan media reported hundreds of recruits were exercising outdoors Thursday morning when the explosion occurred. The Lana agency said an urgent call for blood donations was made after the attack.

Martin Kobler, U.N. special representative to Libya, referred to the incident as a suicide attack, and commented on social media, “I condemn in the strongest terms today’s deadly suicide attack in Zliten, call on all Libyans to urgently unite in fight against terrorism.”

The explosion at the police camp came as oil refineries in western Libya were under attack by IS militants Thursday. At least six oil tanks were reportedly on fire at the port terminals of Sidra and Ras Lanuf. The Libya Herald reported Gen. Khalifa Hafter, commander of the military of the recognized government, ordered fighter planes to the eastern city of Benghazi to help protect oil installations from further attacks. 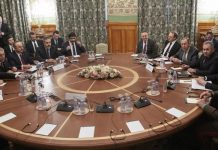