Dec. 29 (UPI) — An 18-wheeler spilled tons of avocados onto a Texas interstate after the truck caught on fire Thursday.

About 40,000 pounds of avocados spilled across Interstate 35E south of Waxahachie after the big rig caught fire as the result of what the Texas Department of Public Safety suggested was a mechanical issue.

No injuries were reported, and officials with the Corsicana Highway Patrol said there was no environmental threat because the truck wasn’t carrying any hazardous materials.

Sheriff’s deputies closed all northbound lanes as firefighters worked to extinguish the blaze.

All lanes on the roadway were reopened at 2:30 p.m., about three hours after the incident. 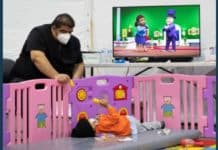