OTTAWA, Oct. 19 (UPI) — Liberals won big Monday, lifting the son of a former prime minister to lead Canada in the most costly election in the nation’s history.

Justin Trudeau, 43, is Canada’s prime minister-elect after his Liberal Party won 184 seats in the nation’s parliament. The sweeping victory was by a wider margin than predicted and ended the 10-year run of Conservative Prime Minister Stephen Harper.

Trudeau is the son of former Prime Minister Pierre Trudeau, a legendary Canadian politician who ran the country from 1968 to 1974 and again from 1980 to 1984. Pierre Trudeau died in 2000, but his son’s elevation to prime minister creates the first family political dynasty in Canada’s history.

Conservatives attacked Trudeau as shallow and inexperienced, but he had a strong debate performance. Trudeau presented himself as the sunny and energetic alternative to the very serious Harper, helping change perceptions and party fortunes.

The Liberals held 34 seats in Parliament after the 2011 election and after the longest national election in almost 150 years, Trudeau led his party from a distant third in the polls to Monday’s surprising victory. 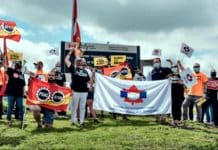