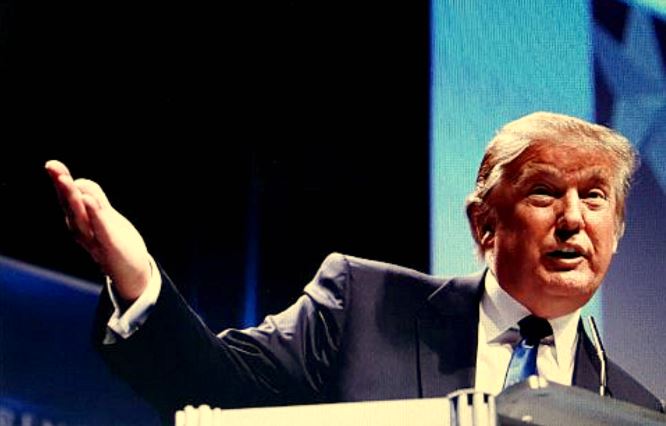 Nov. 1 (UPI) — President Donald Trump said Thursday that his administration plans to place new limits on who can ask for asylum as the U.S. military builds tents along the southern border to hold people who cross the border illegally.

Only migrants who seek to enter the United States as legal ports of entry will be allowed to claim asylum, he said. Those who cross illegally, will be held until deportation.

Trump made the announcement during a speech in the Roosevelt Room of the White House five days before American voters decide who controls the houses of Congress.

Trump called immigration at the southern border with Mexico a “crisis,” specifically calling attention to a group of Central American migrants walking north through Mexico, some of who said they intend to seek asylum in the United States. The president, who has repeatedly referred to the group of migrants as a “caravan,” told them to immediately turn around, accusing them of fraudulent asylum claims.

“We will not allow our generosity to be abused by those who would break our laws, defy our rules, violate our borders, break into our country illegally. We won’t allow it,” the president said.

Trump described the migrants as “rough,” citing their brief clash with Mexican police along the border with Guatemala last week.

“I will tell you, anybody throwing stones, rocks, like they did to Mexico and the Mexican military, Mexican police, where they badly hurt police and soldiers of Mexico, we will consider that a firearm,” he said, referring to how the military will treat the migrants once they reach the U.S. border.

Trump said he intends to end the “release” portion of what he called the United States’ “catch and release” program, in which migrants who cross the border illegally and seek asylum are arrested and then released into the country pending a court date.

Earlier this week, the Department of Defense ordered 5,200 U.S. troops to deploy to the border with Mexico ahead of the arrival of the group of Central American migrants who were more than 800 miles from the nearest point of entry in McAllen, Texas, on Thursday. On Wednesday, Trump said the number of troops could increase to 10,000 to 15,000, on par with the 14,000 deployed to Afghanistan.

On Thursday, Trump said the troops were working to build “massive cities of tents” along the border to hold migrants, including families with children, who enter the country illegally. He said they would be held there until deportation.

“Those who choose to break our laws and enter illegally will no longer be able to use meritless claims to gain automatic admission into our country,” Trump said. “We will hold them for a long time if necessary.”

Details about how families and children would be held under the new policy were unclear. Trump said he plans to sign an executive order next week.

The group started with about 120 people and has grown along the way. The Mexican government said the group now consists of 4,000 people, while organizers helping the migrants say there are about 10,000.

Last week, the Mexican government offered temporary residency and work permits to migrants who agreed to stay in southern states. Trump, meanwhile, threatened to cut aid to Guatemala, Honduras and El Salvador for allowing the migrants to leave their countries.