May 26 (UPI) — President Donald Trump landed in Japan on Saturday for a mostly ceremonial visit as the first state visitor since Emperor Naruhito ascended to the throne.

Trump arrived with first lady Melania Trump in Tokyo, eager for the pomp and circumstance as he escapes Democrats’ talks of impeachment back home.

Ceremonies include an imperial dinner banquet hosted by the emperor and his Harvard-educated wife, Empress Masako, to show strong U.S.-Japan ties, as the country depends on Washington for military protection, and a visit to a naval base being arranged by Prime Minister Shinzo Abe.

Trump is also looking forward to presenting a trophy to the winner of Tokyo’s spring sumo wrestling tournament after witnessing the event from ringside seats, White House officials said.

“It’s about 54 inches (tall) and weighs 60-70 lbs,” and “is called the President’s Cup,” a senior White House Official said referring to the trophy.

Trump will meet with Abe on Sunday for a series of engagements and talks about trade, but U.S. officials said the talks will be secondary to the ceremonies meant to flatter him.

The visit marks the first official state visit of the Reiwa era, meaning “beautiful harmony,” which began on May 1, when Emperor Naruhito ascended to the throne following his 85-year-old father’s abdication.

“We just walk off the plane and here we are, along with probably 40 of the greatest business leaders in the world,” Trump said. “The first lady and I are thrilled to be with you as we celebrate Japan’s Reiwa era, a very special time.”

The dinner meeting was meant to promote investment and a new trade agreement to reduce the $68 billion trade deficit with Japan as Trump insists that the United States has gotten an unfair deal.

“The relationship with Japan and the United States I can say for a fact has never been stronger, never been more powerful, never been closer,” Trump said at the dinner. “This is a very exciting time for commerce between the two countries that we both love.”

Trump noted a bilateral trade agreement “will benefit both of our countries. Japan has had a substantial advantage for many, many years, but that’s OK, maybe that’s why you like us so much.”

On Saturday night, Trump was welcomed to Japan with a special lighting of the tallest tower in the world, the 2,080-foot Tokyo Skytree, which Abe displayed on Twitter. 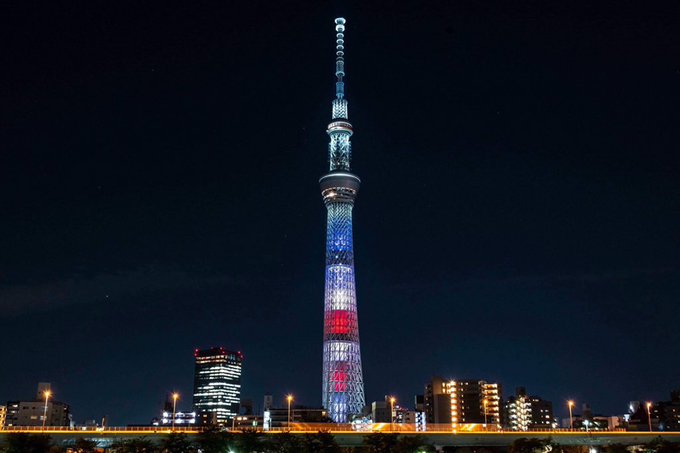 President Trump and the First Lady are staying in Japan as the first State Guests of the new era “Reiwa”! TOKYO SKYTREE welcomes their historic visit with a special lighting inspired by the Stars and Stripes. Akie and I are looking forward to seeing them tomorrow !

Shortly before Trump arrived in Japan, an earthquake shook parts of the region around Tokyo.

The 5.0 magnitude earthquake was 31 miles deep and 7.3 miles south of Ohara, according to the U.S. Geological Survey. Ohra is next to the town of Mobara where Trump and Abe are due to play golf Sunday.

During a refueling stop in Alaska, Trump met onboard with Alaska Gov. Mike Dunleavy and then walked across the airport tarmac to about 200 service members in camouflage fatigues. Gesturing up into the spring sky, Trump exclaimed “breathe that air. It’s real air,” according to a pool report.

The trip begins an intensive foreign travel schedule for Trump, who will later take off for Europe and then go back to Asia over the next month.