Earlier this month, the president was condemned for comments described as racist about four female minority members of the U.S. House.

This time Trump attacked the character of a black 68-year-old Democratic lawmaker, who chairs the House Oversight and Reform Committee, in a tweet Saturday, calling him a “brutal bully” and ripping into his district.

“Rep. Elijah Cummings has been a brutal bully, shouting and screaming at the great men and women of Border Patrol about conditions at the Southern Border, when actually his Baltimore district is FAR WORSE and more dangerous,” Trump tweeted Saturday morning. His district is considered the Worst in the USA.”

He continued to defend border conditions and rant about Cummings’ district in another tweet.

Trump also called for an investigation into Cumming’s handling of the district.

“Why is so much money sent to Elijah Cummings district when it is considered the worst run and most dangerous anywhere in the United States,” Trump tweeted. “No human being would want to live there. Where is all this money going? How much is stolen? Investigate this corrupt mess immediately!”

Since 1996, Cummings has served the 7th District of Maryland, which represents part of Baltimore and its suburbs.The district is about 53 percent black, according to census data, and has a median household income of $60,929. Among the majority-black districts, his district is the second-most wealthy and educated in Maryland, Politico reported.

The civil rights icon responded to Trump’s attacks by tweeting: “Mr. President, I go home to my district daily. Each morning, I wake up, and I go and fight for my neighbors.

“It is my constitutional duty to conduct oversight of the Executive Branch. But, it is my moral duty to fight for my constituents.”

“Rep. Cummings is a champion in the Congress and the country for civil rights and economic justice, a beloved leader in Baltimore, and deeply valued colleague,” she tweeted. “We all reject racist attacks against him and support his steadfast leadership.”

Eleven days ago, the Democrat-controlled House of Representatives formally condemned as racist Trump’s comments on four freshman congresswomen known as “The Squad.”

“Why don’t they go back and help fix the totally broken and crime infested places from which they came. Then come back and show us how it is done,” he tweeted.

They four women are Reps. Ilhan Omar, Alexandria Ocasio-Cortez, Rashida Tlaib and Ayanna Pressley — all of whom are U.S. citizens. Omar, who was a refugee to Minnesota when she was 12, is the only female of the group who is foreign born.

Cummings last week had questioned crowded border conditions and criticized lack of basic humanitarian needs such as sanitation being met.

“You feel like you’re doing a great job, right?” Cummings told Kevin McAleenan, the acting head of Homeland Security, sarcastically. “What does that mean when a child is sitting in their own feces, can’t take a shower, come on man, what’s that about? None of us would have our children in that position. They are human beings.”

“I want to concentrate on these children and I want to make sure that they are okay,” he continued. “I said it before, and I’ll say it again. It’s not the deed that you do to a child. It’s the memory.”

He added that the Trump administration was responsible for separating thousands of migrant children, some as young as 2, from their parents.

A federal judge found that Homeland Security “did a better job of tracking immigrants’ personal property than their children, a court document that Cummings read from last week said.

Even though Cummings criticized Trump’s border policies, Cummings said he wants to work with the president on the “skyrocketing prices of prescription drugs and the financial hardships that families across the nation, and in Baltimore, are facing.”

He added: “Mr. President, we can address this together. Two years ago, I went to the White House to ask you to endorse my bill to let the government negotiate directly for lower drug prices.”

On Friday after a hearing on the high prices, Cummings said he plans to call drug company executives to testify when the House returns from recess in September. 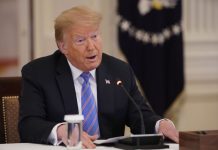