July 14 (UPI) — President Donald Trump on Sunday stated that a group of congresswomen should return to their countries of origin before criticizing U.S. policies.

In a series of tweets on Sunday, Trump alluded to the group of ” ‘Progressive’ Democrat Congresswomen,” who he did not mention specifically by name, urging them to return to the countries where they originally came from whose governments he described as a “complete and total catastrophe” instead of “loudly and viciously telling the people of the United States” how the government should be run.

“Why don’t they go back and help fix the totally broken crime infested places from which they came. Then come back and show us how it is done,” Trump wrote. “These places need your help badly, you can’t leave fast enough. I’m sure that Nancy Pelosi would be very happy to quickly work out free travel arrangements!”

Rep. Alexandria Ocasio-Cortez responded to Trump on behalf of herself, Rep. Rashida Tlaib, D-Mich., and Ayanna Pressley, D-Mass., who were all born in the United States, as well as Rep. Ilhan Omar, D-Minn., who was born in Mogadishu, Somalia.

Omar said that Trump is “stoking white nationalism” because she and other members of Congress are fighting his “hate-filled” agenda.

Pressley said the group of lawmakers would continue their work defending immigrant families from Trump’s policies.

“THIS is what racism looks like,” she wrote alongside a screen capture of Trump’s tweets. “WE are what democracy looks like. And we’re not going anywhere. Except back to D.C. to fight for the families you marginalize and vilify everyday.”

Pelosi also responded, calling Trump’s comments xenophobic and calling on him to stop Immigration and Customs Enforcement raids taking place in multiple U.S. cities and to work with Democrats for “humane immigration policy.”

“When [Trump] tells four American Congresswomen to go back to their countries, he reaffirms his plan to ‘Make America Great Again’ has always been about making America white again,” she wrote. 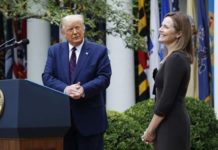 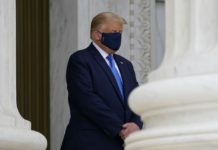