Dec. 16 (UPI) — President Donald Trump and the first lady, Melania, made a 29-minute appearance at the Congressional Ball at the White House on Saturday night, describing the White House as a “happy place.”

Trump, wearing a tuxedo, and his wife, in a silver/white long-sleeve, high-neck gown, descended the stairs as the band played Hail to the Chief, according to the press pool.

The president spoke for four minutes before they mingled with guests at the bottom of the staircase. He noted some of the guests were not Republicans because, “I have a lot of friends who are Democrats.”

“It’s been an incredible two years, it’s been very, very special,” Trump said. “No administration has done more in the first two years than the Trump administration,” he said to cheers and applause.

The president said he is looking forward to getting justice reform and farm bills approved and “I believe we’re going to get really good healthcare.

On Friday night, a federal judge in Fort Worth, Texas, ruled that the Affordable Care Act, specifically its individual mandate requiring Americans to get health insurance, is unconstitutional.

“And the other thing they’re going to start working on very shortly is an infrastructure bill, because that’s something I think everybody wants to see.”

Before meeting some of their guests, Trump said the White House is special and they love living in it. “To me it’s a happy place,” he said. 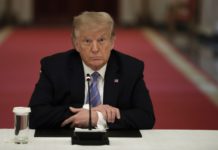