In a series of tweets posted about 6:16 p.m. Eastern Standard Time Monday Trump made the following statement:

I want to thank Emily Murphy at GSA for her steadfast dedication and loyalty to our Country. She has been harassed, threatened, and abused – and I do not want to see this happen to her, her family, or employees of GSA. Our case STRONGLY continues, we will keep up the good … fight and I believe we will prevail! Nevertheless, in the best interest of our Country, I am recommending that Emily and her team do what needs to be done with regard to initial protocols, and have told my team to do the same.

Emily Murphy, head of the GSA, had sent a message to the White House minutes before Trump’s post announcing her decision to being the transition funding process, something she said relayed to earlier in the day to President-elect Biden.

“Please know that I came to my decision independently, based on the law and available facts.” Murphy wrote. “I was never directly or indirectly pressured by any Executive Branch official – including those who work at the White House of GSA – with regard to the substance or timing of my decision. To be clear, I did not receive any direction to delay my determination.”

Murphy had withheld the federal transition funding, saying she was waiting until concerns surrounding the legitimacy of the vote played out.

Earlier Monday an election board in Michigan voted 3-0 to certify the results of all 83 of the state’s counties, including Wayne County, where Trump supporters maintained there widespread voting irregularities. 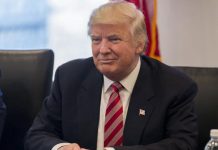 Poll: 50 percent of Americans approve of the way Trump is handling the transition