April 6 (UPI) — President Donald Trump on Thursday said he’s considering a military response against the Syrian government after a surprise chemical attack killed and injured hundreds of civilians near the battle-scarred city of Aleppo this week.

Aboard Air Force One en route to West Palm Beach, Fla., on Thursday, the president expressed disdain for the attack, which American officials believe was orchestrated by President Bashar al-Assad‘s regime against the people of Khan Sheikhoun, in Idlib province.

“What Assad did is terrible,” Trump said aboard the presidential jet after a reporter asked whether Assad should be allowed to stay in power. “What happened in Syria is one of the truly egregious crimes. It shouldn’t have happened. It shouldn’t be allowed to happen.

“I think what happened in Syria is a disgrace to humanity. [Assad is] there, and I guess he’s running things, so something should happen.”

The president declined to offer specifics about the details or scope of the possible actions he’s considering, but did say that he hasn’t yet informed Congress about a potential military response. CNN reported later Thursday that he has informed some lawmakers about the possibility and is discussing options with Defense Secretary James Mattis.

“We agree with the President that Assad has crossed a line with his latest use of chemical weapons,” Sens. John McCain, R-Ariz., and Lindsey Graham, R-S.C., said in a joint statement Thursday. “The message from the United States must be that this will not stand. We must show that no foreign power can or will protect Assad now. He must pay a punitive cost for this horrific attack.”

“This is a test of the new administration, but also for our entire country,” the statement continued. “Assad is trying to see what he can get away with. … There is plenty that Democrats and Republicans in Washington disagree on. But in this instance, we must show the world that we are still capable of putting aside our differences and doing the right thing.”

The bodies of victims lie in a hospital in Khan Sheikhun, Syria, a rebel-held town in Idlib province about 50 miles southwest of Aleppo, following a suspected chemical attack on Tuesday. On Thursday, President Donad Trump said he is considering a military response to the bombing, which U.S. officials believe was ordered by Syrian President Bashar al Assad. Photo by Omar Haj Kadour/ UPI

Syria’s civil war, now in its seventh year, has already resulted in the deaths of more than a half-million people and has been a major source of tension between Washington and Damascus — and the Russian government, which remains a staunch ally of Assad’s and has provided his regime with substantial military support.

Aboard Thursday’s flight, Trump added that he might discuss the attack and its diplomatic impact with Russian President Vladimir Putin — a figure Trump and his staffers are already receiving serious scrutiny over, regarding potential Kremlin interference in last year’s presidential election.

Wednesday, during a visit to the White House by Jordanian King Abdullah II bin Al-Hussein, Trump said he carries the responsibility of U.S. involvement in Syria. Tuesday, he condemned the attack and said it “cannot be ignored by the civilized world.”

Trump has aimed some of the blame at Obama, for purportedly failing to intervene in Syria. The president was subsequently criticized for that accusation in light of the fact that he has previously shunned virtually any U.S. involvement in Syria.

“Forget Syria and make America great again!” he said in a September 2013 tweet.

Diplomatic relations between the United States and Russia are at historically low levels. Putin repeatedly chafed with Obama’s administration over various issues — to the point, intelligence officials say, that he may have even ordered Kremlin operatives to tinker with the American election to keep Democrat and Obama apostle Hillary Clinton out of the White House.

Tuesday was not the first time Assad has been accused of waging chemical warfare on his civilians. Many analysts believe it’s been a hallmark of his bloody six-year crusade to fight off rebels and keep power — similar to what former dictator Saddam Hussein did in Iraq for decades.

Russia, Assad’s biggest ally, has provided military air support for Syria’s fight against Islamic State terrorists and revolutionary insurgents for more than a year. A U.S.-led coalition supporting the rebels has led the charge to oust Assad and has brokered multiple unsuccessful cease-fire agreements for that purpose. American military troops, however, have been scarce inside Syria’s borders — as Pentagon strategists have instead chosen to maintain strictly a training and advisory role for the rebel alliance. 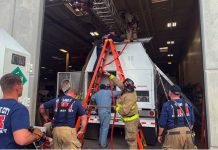