Sept. 22 (UPI) — The special master appointed to review documents seized by the FBI from Donald Trump‘s Mar-a-Lago residence last month, told the former president’s lawyers to produce evidence to back up their claims of planted evidence.

In court documents filed Thursday, Judge Raymond Dearie asked Trump’s lawyers to say definitively if they believe the FBI planted evidence while serving a search warrant in August at the home in Palm Springs, Fla.

“This submission shall be Plaintiff’s final opportunity to raise any factual dispute as to the completeness and accuracy of the Detailed Property Inventory,” Dearie wrote.

Dearie, Senior District Judge of the U.S. District Court for the Eastern District of New York, was appointed as a special master earlier this month. He was one of two candidates proposed by Trump’s legal team.

On more than one occasion, Trump has claimed the FBI may have planted evidence during the search. The judge gave lawyers until Sept. 30 to provide the proof in a declaration or sworn affidavit.

Dearie is tasked with reviewing a tranche of documents seized from the home, as part of an investigation into Trump’s potential mishandling of classified information.

He also mapped out a schedule for the proceedings, complete with filing dates.

The government has a Monday deadline to make the documents available electronically with a spreadsheet to identify them.

Trump’s lawyers also have until then to decide which of the seized documents the former president will assert executive privilege over. All privilege claims must be submitted to Dearie by Oct. 14.

Lawyers have been hesitant to formally declare which of the documents Trump is said to have declassified, arguing it could hurt him down the road if he is indicted.

Dearie didn’t warm to the idea during a hearing on Tuesday.

“You can’t have your cake and eat it.” 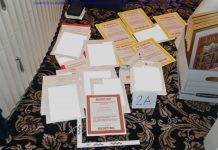