Trump delivered a speech at Miami’s Florida International University where he warned forces loyal to Maduro that they have two choices — pursue democracy or lose everything they have.

He also warned all supporters of Maduro that “the eyes of the entire world are upon you.”

“We seek a peaceful transition of power, but all options are open,” Trump said. “You will lose everything. Let your people go, set your country free.”

The United States has thrown its support behind National Assembly and opposition leader Juan Guaido, who’s declared himself interim president until a new election can be held. Trump has officially recognized him as Venezuela’s temporary leader, but Maduro still controls the military and is using it to cling to power.

Guaido delivered remarks in Spanish at the event via video address, thanking Trump for supporting his challenge to the regime and Florida for taking in Venezuelans that have fled the country.

“This is a moment for Venezuelans where we are determined to reach decisive moments in which we should pressure the dictatorship that has done away with rule of law, maintains political prisoners, and has persecuted many Venezuelans,” Guadio said.

Trump noted that humanitarian aid has stalled at the Venezuelan border, saying Maduro “would rather see his people starve than give them aid.”

Garrett Marquis, a spokesman for national security adviser John Bolton, tweeted Sunday that nearly 200 tons of aid and $100 million has been committed to the crisis in Venezuela. But humanitarian aid shipments into the country have been blocked by Maduro, who doesn’t want U.S. intervention.

The president called on Venezuelan military troops “not follow Maduro’s orders” to block humanitarian aid and warned them not to harm the Venezuelan people or Guaido.

Sen. Marco Rubio, R-Fla., traveled to Cucuta, Colombia, a city near the Venezuelan border where aid is supposed to flow into the crisis-stricken nation. Large containers and overturned trucks are said to be blocking supplies from entering.

Speaking in Spanish, Rubio warned that blocking the entry of U.S. food would amount to a “crime against humanity” and those responsible would spend “the rest of their lives hiding from justice.”

“Those containers behind us were put there by a terrorist, criminal regime,” Rubio tweeted. “It isn’t going to work. Food and medicine will reach the people of Venezuela.”

Elliott Abrams, the U.S. envoy to Venezuela, told Congress this month “the current political and economic environment is unsustainable and [Maduro] will not be able to weather it much longer.” The position, in large part, is due to U.S. sanctions against state-owned oil giant Petroleos de Venezuela SA. The U.S. Treasury said it would consider lifting sanctions if steps are taken to “restore democratic order.”

On Monday, Trump said Maduro and the “small handful at the top of the Maduro regime” have stolen from Venezuela.

“We know who they are and we know where they keep the billions of dollars they have stolen,” Trump said.

In Florida, an estimated 36,000 people identify as Venezuelan and the majority live in the Miami area. They could comprise a critical voting bloc in the swing state in 2020.

Trump also declared that “the twilight hour of socialism has arrived in our hemisphere.”

“The days of socialism and communism are numbered, not only in Venezuela, but in Nicaragua and in Cuba as well,” Trump said.

He later reiterated a message he delivered in his State of the Union address, saying the United States will “never be a socialist country.”

“We are born free and we will stay free, now and forever,” Trump said. 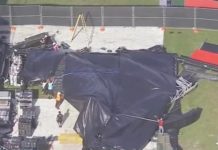 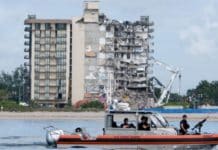