Trump met privately with King and other leaders from his organization, the Drum Major Institute, on Martin Luther King Jr. Day to discuss race in the United States, and specifically King’s efforts to make a free picture identification card available so that black Americans, and anybody else, can vote regardless of voter ID laws in their states.

The meeting was put together after Trump cancelled an appearance at the Smithsonian Museum of African-American History and Culture in Washington, D.C., possibly because of an exchange he had with Congressman John Lewis, who worked with Dr. Martin Luther King Jr. during the civil rights movement, that included an insult about the icon being “all talk and no action.”

Before the meeting, Trump tweeted about the holiday for people to “celebrate Martin Luther King Day and all the many wonderful things that he stood for. Honor him for the great man that he was!”

King did not include details of the meeting while speaking with reporters at Trump Tower, but said the conversation had been “constructive,” and others said the president-elect seemed interested in further investigating the picture ID idea.

“He said that he is going to represent Americans — he’s said that over and over again,” King, told reporters after the hour-long meeting. “We will continue to evaluate that.”

Lewis questioned the legitimacy of Trump’s presidency in an interview with NBC News on Friday, saying he believed Russia had helped Trump win while they “helped destroy the candidacy of Hillary Clinton.”

Trump responded on Twitter the next morning, saying Lewis should work harder to help his district, saying it is falling apart and infested with crime, and suggesting he is “all talk, talk, talk — no action or results.”

An immediate reaction hit back at Trump over the comments about Lewis, who not only worked with Dr. King during the civil rights movement, but was one of the original Freedom Riders and was beaten by police during protests to demand recognition of the civil rights of black Americans.

Former U.N. ambassador and civil rights activist Andrew Young, who participated in the meeting by phone, said in a letter to Trump before the meeting that it should happen despite the “regrettable exchange between you and my friend John Lewis” because not talking will not help solve racial and other problems.

“The first rule of Kingian nonviolence is that you can never find common ground without conversation,” Young said.

King has acknowledged the prospect that Trump will roll back many of the advances made during President Barack Obama‘s years in office, but he is hopeful the government ID concept could move forward.

“First of all I think that in the heat of emotion a lot of things get said on both sides,” King said of Trump’s response to Lewis, dismissing it as a reason to stop talking to the incoming president about issues the country faces. “The goal is to bring America together and Americans.”

Obama: ‘We have to be more like John Lewis if we want true democracy’ 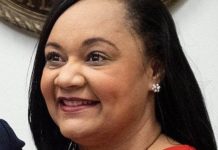