June 4 (UPI) — President Donald Trump nominated venture capitalist Richard Spencer to be secretary of the Navy to replace his prior pick, who withdrew his name from consideration.

Trump made the announcement Friday after Philip Bilden declined the nomination in February. The former military intelligence and cybersecurity leader said his ties to Asian financial markets could not meet ethics standards without harming his family’s financial interests.

Spencer previously served as a managing partner for Fall Creek Management, an investment company. He also served as vice chairman and chief financial officer for Intercontinental Exchange, president of Crossroads Group, and spent the previous 12 years in finance, the White House said in a statement.

Spencer served in the Marine Corps as a captain. His nomination to the secretary post must be confirmed by the full Senate.

Trump nominated Bilden on Jan. 25. Retired Adm. James Stavridis, a former NATO commander, said at the time that Bilden’s expertise regarding Asia, and China in particular, would be an asset in the secretary’s position. 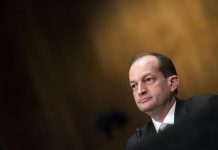