“I am supportive of Lamar as a person & also of the process, but I can never support bailing out ins co’s who have made a fortune w/ O’Care,” Trump posted to Twitter Wednesday.

Only a day earlier, the president called the bipartisan legislation “a short-term deal because we think ultimately block grants are going to be the answer,” referring to state grants proposed by another bill that failed to get enough support.

“I’m pleased the Democrats have finally responded to my call for them to take responsibility for their Obamacare disaster and work with Republicans,” he said in a speech to the Heritage Foundation Tuesday. “While I commend the bipartisan work done by Senators Alexander and Murray … I continue to believe Congress must find a solution to the Obamacare mess instead of providing bailouts to insurance companies.”

“The Alexander-Murray agreement has strong language to do that, and I will work with the president to see if we can make it even stronger,” Alexander tweeted Wednesday.

Alexander told Axios Wednesday that Trump called him earlier in the day to encourage him about the bill.

“Trump completely engineered the plan that we announced yesterday,” Alexander said. “He wanted a bipartisan bill for the short term.”

Senate minority leader Chuck Schumer on Wednesday criticized Trump for “zig zagging” on policy and pandering to the extreme right out of “blatant fear.”

“We should have a president who actually knows the facts of bills he talks about,” he said.

“It doesn’t bail out the insurance companies. It helps people who are sick and who need healthcare.”

Although Senate Democratic leaders said they support the compromise, Republican leaders haven’t signed on to the plan.

House Speaker Paul Ryan‘s spokesman, Doug Andres, said Wednesday Ryan “does not see anything that changes his view that the Senate should keep its focus on repeal and replace of Obamacare.”

Senate Majority Leader Mitch McConnell, R-Ky., said Tuesday, “We haven’t had a chance to think about the way forward yet.”

Congressional Republicans have tried for months to repeal and replace the ACA, but their legislation has so far failed to find enough support. 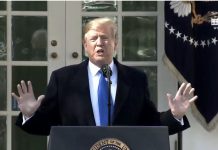