Funding for airlines under the Payroll Support Program expired at the end of September, causing the companies to begin layoffs of some 30,000 workers without replacement legislation in place. Those layoffs were all but made certain Tuesday afternoon when Trump pulled his negotiators out of talks with Democrats on another stimulus bill.

But the industry saw a possible lifeline after Trump reversed course on his decision Wednesday, saying he’s open to pursuing smaller-scale, individual measures. He said he would approve another direct $1,200 stimulus payment to Americans and stand-alone funding for certain industries, including airlines.

Pelosi threw her support behind such a stand-alone package earlier this month, promising airlines she saw additional funding in their future.

“I’m optimistic, I’m always optimistic. We always have to find a path, that is our responsibility to do so, and I believe that we will,” she said at the time.

The contradictory messages from Trump came a day after he returned to the White House from Walter Reed National Military Medical Center, where he was treated for COVID-19.

Trump’s initial message was followed by a selloff in U.S. equity markets and stoked fears that homes and businesses would face more hardship brought on by the pandemic.

“Make no mistake: if you are out of work, if your business is closed, if your child’s school is shut down, if you are seeing layoffs in your community, Donald Trump decided today that none of that matters to him,” Democratic presidential nominee Joe Biden said in a tweet.

“Trump turned his back on millions of Americans who are struggling to get through this global pandemic and desperately needed relief,” added Biden’s vice presidential running mate Sen. Kamala Harris, who will appear with Vice President Mike Pence Wednesday night in their only debate.

Earlier Tuesday, Federal Reserve Chairman Jerome Powell warned that a lack of more stimulus could lead to a “weak recovery” and “unnecessary hardship” for millions of Americans.

Pelosi and other congressional Democrats have been negotiating for weeks with White House Chief of Staff Mark Meadows and Mnuchin on a new round of stimulus. The House favors a larger package that includes money for unemployed Americans, businesses and states to fight the pandemic. Republicans have favored a more piecemeal approach with smaller, individual measures that earmark less money for only certain recipients.

The House passed a $2.2 trillion measure last week that includes another $1,200 payment and resurrects an enhanced federal unemployment supplement of $600 per week, which out-of-work Americans have not received since late July when the first round of aid expired.

Republicans balked at the proposal, objecting to funding for state and local governments whose revenues have been interrupted by the health crisis. 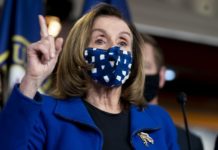