Aug. 5 (UPI) — With President Donald Trump on a two-week summer vacation, staff in the West Wing have relocated across the street so government workers can carry out a $3.4 million renovation of the White House workspace.

The renovations have been in the works since the Obama administration and include both aesthetic changes and mechanical ones. The building’s unreliable 27-year-old heating and air-conditioning system, which the General Services Administration said is well beyond its useful life, is being replaced.

As has become customary in the initial stages of an administration, the Oval Office is also being remodeled. A photo from a White House staffer showed an empty room and a ladder sitting near the fireplace, with work beginning only an hour after Trump departed Washington on Friday to stay at his Bedminster, N.J., golf resort. 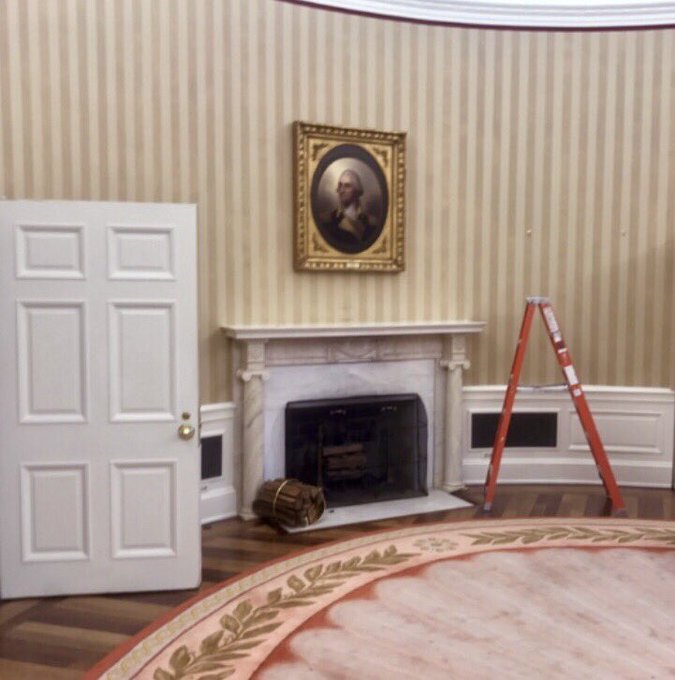 Renovations underway at the @WhiteHouse. One hour after Air Force One is wheels up

the Oval Office is empty. West Wing is clearing out now.

The West Wing, which houses the working space at the White House, was built as an addition to the president’s official residence under Theodore Roosevelt in 1902. The two floors of office space house the Oval Office and room for top advisers. The Roosevelt Room, the main conference room in the West Wing, is a tribute to the former president whose plan, recreated in hundreds of television shows and movies, shaped how Americans envision their president at work.

In another longtime Washington custom — one Trump also engaged in frequently during his campaign — political opponents this week criticized the president for taking a vacation. The Democratic National Committee released a compilation of statements Trump made criticizing his predecessor Barack Obama and Trump’s own pledges he would not have time for golf trips if he became president.

With the capital muggy and sweltering in the dog days of summer, presidents from both parties have used August as a time to get away for a break with their families. The Obamas took a yearly two-week trip to Martha’s Vineyard, a spot favored by the Clintons, as well. Former President George W. Bush spent time on his ranch in Crawford, Texas. The Reagans returned to their native California for most of their summer vacations.

The environs were not as comfortable for West Wing employees who aren’t taking a vacation this month. Staff packed into the Eisenhower Executive Office Building across the street from the White House, jockeying for small offices and time in overbooked conference rooms, leaving the West Wing largely empty save the press office and briefing room, which are not affected by the renovations.

In addition to the Oval Office renovations, the West Wing will get new carpets and drapes and fresh coats of paint. The changes reflect not just the need to spruce up a 200-year-old building, but offers Trump the chance to put his own stamp on 1600 Pennsylvania Ave. Deputy press secretary Lindsay Walters said workers will replace the yellow-themed carpets and drapes preferred by the Obamas.

“There will be no more yellow,” she said.