Press secretary Sarah Sanders announced the waiver of the Jones Act, and said it will “go into effect immediately.”

President Donald Trump granted the waiver after it was requested by Puerto Rico Gov. Ricardo Rossello, who thanked the president Thursday morning.

The Jones Act, enacted after World War I, requires that ships traveling from one U.S. port to another must be American-flagged vessels with U.S. crews. Goods going from the mainland to Puerto Rico, for example, must be on U.S. ships — even if faster or less expensive means are available.

Food, medical supplies and clean water are scarce on the island, which is still mostly without power. Although relief efforts are underway, critics have noted that the Trump administration has been slow to authorize federal help for the island, a U.S. territory.

The act was lifted during the recoveries of Texas and Florida after recent hurricanes.

At @ricardorossello request, @POTUS has authorized the Jones Act be waived for Puerto Rico. It will go into effect immediately. 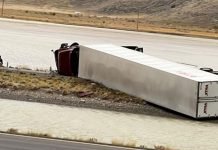