Dec. 21 (UPI) — President Donald Trump, expressing support for a wall along the southern border Thursday, said he won’t sign a stopgap spending bill in its current form because it doesn’t include enough funding for border security.

“At this moment there is a debate over funding border security and the wall,” he said during a signing ceremony for a separate farm bill.

“I have made my position very clear. Any measure that funds the government must include border security, has to. Not for political purposes, but for our country, for the safety of our community.”

His remarks came after a meeting with House Republicans over the short-term spending bill. House Speaker Paul Ryan told reporters Trump doesn’t plan to sign the bill in its current form.

Trump’s refusal throws a wrench in Congress’ plans to pass the bill, which would avert a government shutdown the deadline for which is Friday. Earlier this month, the president said he would be “proud” to shut down the government if the spending bill doesn’t include the $5 billion in funding he requested to build a border wall.

“The president informed us he will not sign the bill,” Ryan said after meeting with Trump at the White House.

“We have very serious concerns about securing our border. The president said, ‘I will not sign this bill.’ So we’re going to go back and work on adding border security to this,” Ryan added.

Ryan’s announcement came as the House prepared to vote on the bill passed by the Senate on Wednesday. It provides funding for about 25 percent of the federal government for seven weeks through Feb. 8.

If the stopgap bill fails and the government runs out of money, it would be the third shutdown of Trump’s presidency. The first one started on Jan. 20 and the second one on Feb. 9 lasted a few hours.

On Wednesday, it appeared as though Trump was backtracking on his promise to shut down the government over the wall funding. He changed course Thursday morning.

“When I begrudgingly signed the Omnibus Bill, I was promised the Wall and Border Security by leadership. Would be done by end of year (NOW). It didn’t happen! We foolishly fight for Border Security for other countries – but not for our beloved U.S.A. Not good!” he tweeted.

White House press secretary Sarah Sanders, in a tweet posted after Trump’s Thursday meeting with members of the House, said the country “urgently” needs funding for border security that includes a wall.

“Not surprisingly, they all feel strongly about border security — stopping the flow of drugs, stopping human trafficking and stopping terrorism. We protect nations all over the world, but Democrats are unwilling to protect our nation,” she said.

On Thursday, Trump said “open borders,” which he accused Democrats of support, hurt poor Americans the most because undocumented immigrants drain resources.

“If we don’t stand strong for our national borders then we cease to be a nation and we betray our commitment to the loyal citizens of our great country,” he said.

Trump’s decision not to sign the legislation came after several senators left the capital to return to their home states for the holiday break. Sen. Ron Johnson, R-Wis., said about a third of Republican senators were still in town and most Democrats already left.

Meanwhile, dozens of representatives in the House also were absent.

Sen. Susan Collins, R-Maine, told The Hill she doesn’t think there are enough votes to pass a bill with border wall funding.

We can’t have a government shutdown, period,” she said. “It’s never good. How many times do we have to learn that?” 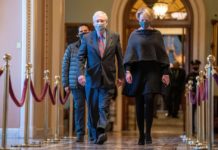