May 26 (UPI) — President Donald Trump spent an enjoyable day in Japan with Prime Minister Sinzo Abe — a round of golf, a sumo wrestling match, meals of breakfast, hamburgers and barbecue, and some diplomacy Sunday.

It was Trump’s first full day in Japan after Air Force One landed at Haneda International Airport in Tokyo just before 5 p.m. local time Saturday — 16 hours after departing from Washington, D.C.

These activities as well as a meeting with business leaders on Saturday night and trade talks on Monday are part of the royal pageantry of a state visit, the first for Japan’s newly enthroned Emperor Naruhito.

“The prime minister and I talked lot today about trade and military and various other things,” Trump said at the start of the barbecue dinner after being handed his first course on a long wooden paddle. “I think we had a very productive day.”

And back at Palace Hotel Tokyo on Saturday night, he tweeted about trade.

Trump had begun his day tweeting he wasn’t too concerned about North Korea’s recent missile launch tests, which are at odds with his host Abe.

“North Korea fired off some small weapons, which disturbed some of my people, and others, but not me,” Trump wrote on Twitter.

After tweeting, Trump then joined Abe at Mobara Country Club south of Tokyo, where they played 16 holes and dined together for breakfast and lunch, which included double cheeseburgers made from American beef, according to Japan’s foreign ministry.

They posed for a selfie taken by Abe.

Then, they attended a Sumo match for 1 1/2 hours, according to a pool report.

The leaders and their spouses were seated in chairs, instead of the customary mats, a few yards from the sumo ring.

Trump presented a 4 1/2-foot-tall trophy, weighing between 60 and 70 pounds, to the victor, 25-year-old Asanoyama.

“In honor of your outstanding achievement as sumo grand champion I hereby award you the President’s Cup,” Trump said, adding the date under the Japanese era he called “Reiwa.”

He added: “We bought that beautiful trophy which they’ll have hopefully for many hundreds of years.”

The two couples then dined at a traditional charcoal hibachi restaurant in Tokyo, Inakaya. The meal included grilled chicken and wagyu beef steak, according to the White House.

Abe took Trump’s predecessor, Barack Obama, to a sushi restaurant, Sukiyabashi Jiro, regarded as among the best in the world.

Trmp spoke briefly with reporters in attendance before they were ushered out, saying he expects a productive day in meetings Monday after “incredible evening at sumo,” according to the pool report. “Sumo wrestling.”

The motorcade arrived back at the hotel at 7:45 p.m., according to the pool report. 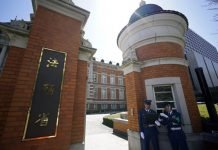 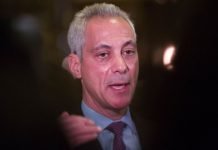