House Democrats want to know whether Trump withheld military aid to Ukraine as a condition of Zelensky investigating the Bidens. That would be an abuse of power because the $400 million in military aid was congressionally approved and needed to counter Russian aggression.

Hill was expected to discuss her concerns over the removal of U.S. ambassador to Ukraine Marie Yovanovitch, who gave her own nine-hour closed-door testimony last week. Yovanovitch reportedly told lawmakers that Trump pressured the U.S. State Department to have her removed despite her 30 years of experience under six administrations.

House members were also expected to ask about the conduct of Trump’s personal lawyer Rudy Giuliani and U.S. Ambassador Gordon Sondland. Sondland is scheduled to testify Thursday under subpoena.

Angela Stent, director of the Center for Eurasian, Russian and East European Studies at Georgetown University, told NPR Sondland and Giuliani were doing things outside the “purview of the National Security Council.”

Specifically, Giuliani is accused of bypassing proper channels to conduct shadow diplomacy aimed at finding dirt on Biden, one of Trump’s top political rivals for the 2020 election.

Hill was born in northern Britain into a family of coal miners. She became a Russian scholar, earning a doctorate from Harvard University before joining the National Intelligence Council as an officer for Russia. She’s considered a top expert on Russian politics and history and has been a harsh critic of Russian President Vladimir Putin.

Trump has defended his phone call with Zelensky, releasing the transcript and saying it was “absolutely perfect” with no quid pro quo. 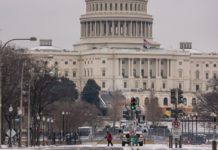